What does the Koran say about nonbelievers?

What does the Koran say about nonbelievers?

Ah, the peace, love and tolerance! Here are some delightful sentiments that we should encourage spreading around the world! Why, oh why, are there violent religious fanatics attacking nonbelievers all over the globe?? [/sarc]

Quotes from the Quran/Koran 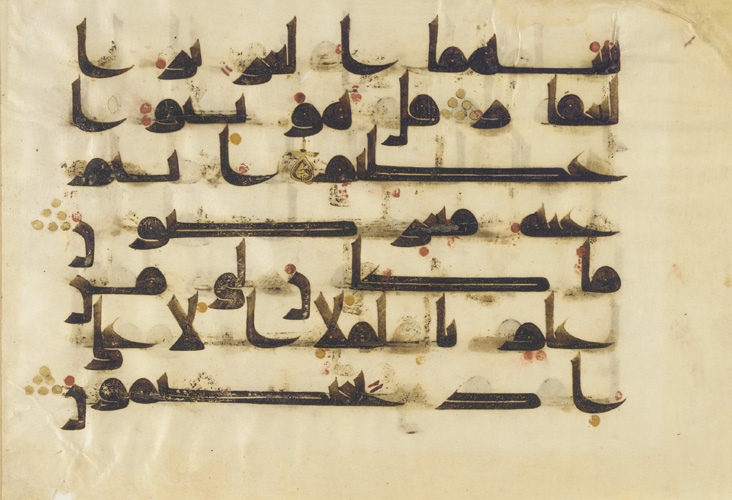 “This Book is not to be doubted…. As for the unbelievers, it is the same whether or not you forewarn them; they will not have faith. God has set a seal upon their hearts and ears; their sight is dimmed and grievous punishment awaits them.” Quran 2:1/2:6-2:10

“God’s curse be upon the infidels! Evil is that for which they have bartered away their souls. To deny God’s own revelation, grudging that He should reveal His bounty to whom He chooses from among His servants! They have incurred God’s most inexorable wrath. An ignominious punishment awaits the unbelievers.” Quran 2:89-2:90

“Lord…Give us victory over the unbelievers.” Quran 2:286

“Lord…give us victory over the unbelievers.” Quran 3:147

“I shall cast terror into the hearts of the infidels. Strike off their heads, strike off the very tips of their fingers.” Quran 8:12

“Let not the unbelievers think they will ever get away. They have not the power so to do. Muster against them all the men and cavalry at your command, so that you may strike terror into the enemy of Allah and your enemy…” Quran 8:59-60

“When the sacred months are over slay the idolaters wherever you find them. Arrest them, besiege them, and lie in ambush everywhere for them.” Quran 9:5

“Prophet, make war on the unbelievers and the hypocrites and deal rigorously with them. Hell shall be their home: an evil fate.” Quran 9:73

“Believers, make war on the infidels who dwell around you. Deal firmly with them. Know that God is with the righteous.” Quran 9:123

“Believers, take neither the Jews nor the Christians for your friends. They are friends with one another…” Quran 5:51

“He that chooses a religion over Islam, it will not be accepted from him and in the world to come he will be one of the lost.” Quran 3:85

“Let not believers make friends with infidels in preference to the faithful – he that does this has nothing to hope for from Good – except in self-defense. God admonishes you to fear Him: for to God shall all return.” Quran 3:28

“Garments of fire have been prepared for the unbelievers. Scalding water shall be poured upon their heads, melting their skins and that which is in their bellies. They shall be lashed with rods of iron.

“Whenever, in their anguish, they try to escape from Hell, back they shall be dragged, and will be told: ‘Taste the torment of the Conflagration!'” Quran 22:19-20

“Muhammad is God’s apostle. Those who follow him are ruthless to the unbelievers but merciful to one another.” Quran 48:29

“Those that deny Our revelations We will burn in fire. No sooner will their skins be consumed than We shall give them other skins, so that they may truly taste the scourge. God is mighty and wise.” Quran 4:56

“Believers, know that the idolaters [non-Muslims] are unclean. Let them not approach the Sacred Mosque after this year is ended.” Quran 9:28

“The unbelievers among the People of the Book [Bible] and the pagans shall burn for ever in the fire of Hell. They are the vilest of all creatures.” Quran 98:6

For the Dawood translation with the side-by-side Arabic, follow the links here:

Quotes from the Koran/Quran
http://truthbeknown.com/islamquotes.htm

Kaffir is an Arabic term for a nonbeliever or “infidel.” Kuffar is the plural, “infidels”:

Also spelled ‘kafir’ or ‘kaffir’, Kuffar is a highly derogatory Arabic term used to refer to non-Muslims, though it is usually directed less against “People of the Book” (Christians and Jews) and more against others (Hindus, Buddhists, Shintoists, etc).

“Against kuffars make ready your strength to the utmost of your power, including steeds of war to strike terror into the (hearts of) the Enemy of Allah and your enemy, and others beside, whom you may not know, but whom Allah does know. Whatever you shall spend in the Cause of Allah, shall be repaid to you, and you shall not be treated unjustly.” (Qur’an: 8:60) 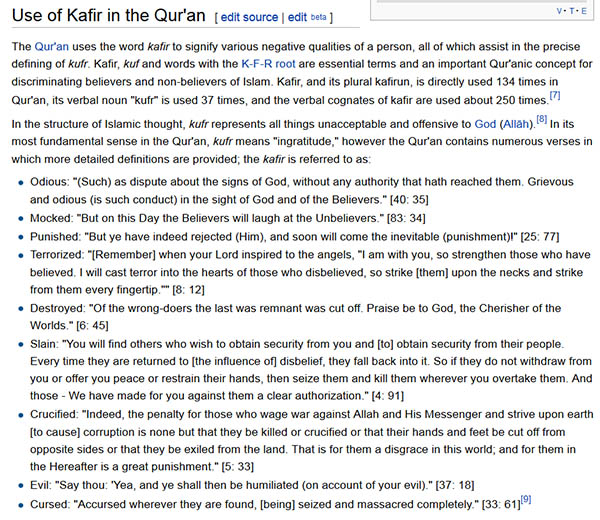 Lest one be tempted to shout, “Out of Context!,” note that it is not we who are taking these Koranic quotes “out of context” but devout (“radical/extremist”) Muslims such as those in the “ummah” or Islamic global community who are doing so. (Note that awliyaa means “friends of Allah.”) The videos below demonstrate this infidelophobic attitude, which we can tell also from the vast bloodshed over the past 1,400 years or so of jihad against infidels. 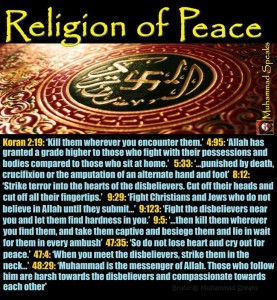 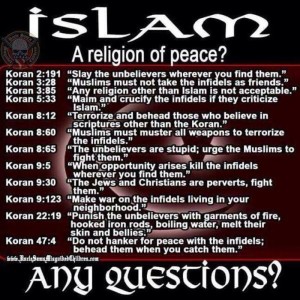