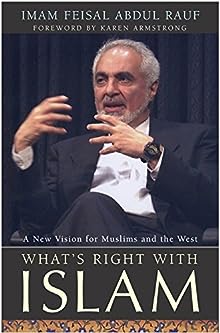 The title of Rauf’s 2005 book in Malaysia translates as: A Call to Prayer from the World Trade Center Rubble: Islamic Dawa in the Heart of America Post-9/11. This link will lead you to the chapter entitled, “America: A Sharia-Compliant State.” There Rauf writes:

For America to score even higher on the “Islamic” or “Shariah Compliance” scale, America would need to do two things: invite the voices of all religions to join the dialogue in shaping the nation’s practical life, and allow religious communities more leeway to judge among themselves according to their own laws.

Yep, that’s right: According to Rauf, we Americans need to become more Islamic and to allow “religions” (i.e., ISLAM) to shape our politics and to govern themselves (i.e., ISLAM) by their own laws (i.e., SHARIA).

Sorry, but this American has NO interest in her country becoming more Islamic or sharia-compliant.

According to Diana West, “hidden material” from Rauf’s website on the Shariah Index Project defined its “goal” as to “define, interpret and implement the concept of the Islamic state in modern times.” West also says:

Since 2006, Rauf has coordinated a series of international meetings with Shariah experts ranging from Muslim Brotherhood associates to Iran’s Mohammad Javad Larijani, “who,” as Brim reports, “has justified torture of Iranian dissidents as legal punishments under Shariah law.”

That’s not all Larijani, who heads Iran’s Human Rights Council (for real), has justified. He has also justified Shariah-sanctioned stoning. As Anne Bayefsky recently reported, Rauf’s picture with Larijani (and former U.S. Ambassador to the Organization of the Islamic Conference Sada Cumber) disappeared from the Cordoba Initiative Web site, too.

So much to hide – but the Shariah is out of the bag.

And here’s an interesting little tidbit from MSNBC: