Is making your child ‘cry it out’ child abuse?

Is making your child ‘cry it out’ child abuse? 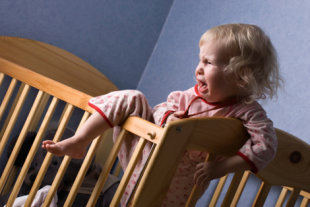 Has it really taken humanity this long to figure out that babies and small children need near-constant physical contact, love and affection? They’re small, vulnerable and helpless! All this hardness has done is to produce hard adults.

Is Crying it Out Dangerous for Kids?

…In an article published this week in Psychology Today, one researcher says that crying it out could be dangerous for children, leading to a lifetime of harm.

“A crying baby in our ancestral environment would have signaled predators to tasty morsels,” writes Darcia Narvaez, an Associate Professor of Psychology and Director of the Collaborative for Ethical Education at the University of Notre Dame. “So our evolved parenting practices alleviated baby distress and precluded crying except in emergencies.”

When babies are stressed, their bodies release the hormone cortisol, which can damage or even destroy neurons in their still-developing brains, researchers at Yale University and Harvard Medical School have found. That can lead to a higher incidence of ADHD, poor academic performance, and anti-social tendencies….

“In studies of rats with high or low nurturing mothers, there is a critical period for turning on genes that control anxiety for the rest of life,” Narvaez writes. “If in the first 10 days of life you have low nurturing rat mother (the equivalent of the first 6 months of life in a human), the gene never gets turned on and the rat is anxious towards new situations for the rest of its life, unless drugs are administered to alleviate the anxiety.”

Could a lack of nurturing explain our “Prozac Nation?” Narvaez points out that she’s witnessed the long-term physical effects of it firsthand.

“I was raised in a middle-class family with a depressed mother, harsh father and overall emotionally unsupportive environment — not unlike others raised in the USA,” she writes. “I have only recently realized from extensive reading about the effects of early parenting on body and brain development that I show the signs of undercare — poor memory (cortisol released during distress harms hippocampus development), irritable bowel and other poor vagal tone issues, and high social anxiety.”…

So, between letting children “cry it out,” cutting off parts of their genitals, and sticking them with needles some 20 times (vaccines) before they are a year or so old, what kind of people are we creating here?

…RAD arises from a failure to form normal attachments to primary caregivers in early childhood. Such a failure could result from severe early experiences of neglect, abuse, abrupt separation from caregivers between the ages of six months and three years, frequent change of caregivers, or a lack of caregiver responsiveness to a child’s communicative efforts. Not all, or even a majority of such experiences, result in the disorder….

Children with RAD are presumed to have grossly disturbed internal working models of relationships which may lead to interpersonal and behavioral difficulties in later life.