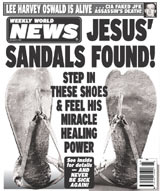 On Christmas Eve, a popular radio program featured a Christian apologist who presented “historical evidence for the life of Jesus Christ.” I didn’t listen to the show, but I am willing to bet that this apologist, Dr. Gary Habermas of Jerry Fallwell’s Liberty University, trotted out the same old and tired “references” in non-Christian texts that have been bandied about for hundreds of years. These paltry “references” have been shown repeatedly over the centuries to be essentially worthless in terms of serving as credible, scientific evidence for the Jewish superman’s historical existence. Naturally, the refutations of this useless material have been devoutly ignored, while the religious hucksters continue to use these supposed citations to enthrall the masses, who remain largely ignorant of the rebuttals, in significant part because mythicist scholars are never given comparable airtime in the mainstream media.

These purported references to Jesus Christ in secular or Jewish sources include:

As I have revealed in my writings, none of these alleged citations serve as credible and scientific evidence for the existence of the Jewish godman who purportedly shook up the world – for a variety of reasons, including that none of them are earlier than the end of the first century and therefore do not constitute the testimony of eyewitnesses, if they are even genuine to the authors claimed. Indeed, in consideration of the some two dozen scriptures in the New Testament that claim Jesus Christ was famed far and wide, it is astonishing that in reality there exists not a single word about him from any contemporary historian or other writer of his time!

I demonstrate this fact of there being no valid evidence for the existence of Jesus Christ, along with other reasons to doubt the gospel tale, in my book Who Was Jesus? Fingerprints of The Christ. Following is just one blurb from a reader of Who Was Jesus?, which contains quotes from numerous Christian authorities, who themselves admit the evidence for Jesus is extremely slim.

“I think I’ve read every popular alternative theory about Jesus that has come down the pike – with Who Was Jesus? I was very impressed.

“This book gives me pause for serious thought.”