God in the Box documentary at Heartland Film Festival in Indianapolis

God in the Box documentary at Heartland Film Festival in Indianapolis 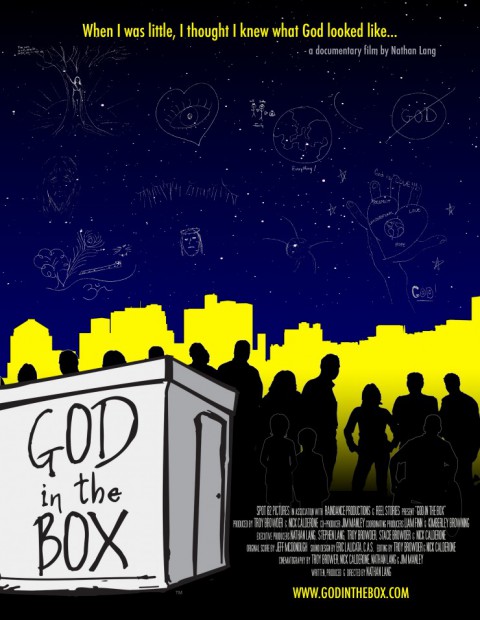 Great news! The long-awaited documentary “God in the Box” is going to be screened at the Heartland Film Festival in Indianapolis, Indiana! See if you or someone you know can make it – you might just recognize a familiar face…

“God in the Box” is a fascinating film made by Nathan Lang and Nick Calderone, who traveled with some other friends to various places in the U.S. and elsewhere, asking passersby off the street their impressions of the concept of God. Numerous people of both genders, all walks of life, and a wide variety of ethnicities and religions, as well as non-religion – practically the full spectrum – took the time to express themselves in an often profound manner, by stepping inside a home-made black box to face a camera in privacy.

The results are truly beguiling, as soul after soul speaks from the heart about his or her innermost views on the grandest mystery of the cosmos. These daring individuals’ views are revealed not only in word but also in art, some of which is striking, as it shows where so many of these opinions meet. Also represented are those who express no belief or disbelief in God, with good reason.

The documentary really brings people together, as it is not only respectful of all the perspectives expressed but it also takes a different tack that many of my friends and supporters will recognize – as they will also recognize my face on the screen! Yes, when I viewed earlier drafts, I was quite stunned to see how much the director Nathan Lang had included of my perspective. I was also amazed to see featured one of my friends, who had stepped inside the box in a different city. A wonderful coincidence.

Everything comes together nicely in this film, which truly touched my heart. “God in the Box” is an uplifting, inspiring and encouraging vision.

If you or anyone you know live near Indianapolis, check the film festival for tickets or pass along this blog. You can click on the image below for a PDF file that can be printed out.

God in the Box Forum Discussion

God in the Box announcement at Examiner.com