Because in fact there is no obvious evidence for the historicity of Jesus of Nazareth that can be compared to the evidence, say, for Tiberius Caesar, when Bart Ehrman set to writing his book Did Jesus Exist? The Historical Argument for Jesus of Nazareth [HarperOne, 2012] he was forced to resort to alleging the existence of evidence embedded in arguments so subtle and indirect and so far removed from straight-forward types of evidence that they become untestable. When stripped down to their logical structures, however, these arguments become the rhetorical equivalent of the Emperor’s New Clothes.

Once upon a time there lived a vain Emperor whose only concern in life was to dress up in elegant clothes and regalia. He changed outfits almost every hour and always was eager to show them off to the people.

Word of the Emperor’s refined habits spread across his kingdom and abroad. Two scoundrels, hearing of the Emperor’s vanity, decided to take advantage of it to make a profit. They introduced themselves at the gates of the palace with an incredible scheme.

“We are expert clothificators,” one of the scoundrels told the entry guard. I hold a doctorate in sartoriology, and my colleague here is a doctor of haberdasheristics. We are professors from Harvard University in America. The fame of your Emperor has spread even to the other side of the ocean and we realized that we could be of service to him. In fact, we can help him in a way that no one in his kingdom is able.”

“In what way can you help His Majesty?” asked the guard.

“After many years of research,” replied the sartoriologer—adding a comment about Harvard being a research University—“we have developed a wonderful method to weave a cloth so light and fine that it looks invisible.”

“Wow!” replied the guard. “Is it really invisible?”

“Well,” chimed in the haberdasheristicist, “in a technical sense, it isn’t. Highly competent, intelligent, and appropriately educated people can see it—especially those holding doctorates in clothification. But people who are incompetent and stupid—or those holding doctorates in inappropriate areas of study—are utterly deficient in the refined sense required to perceive it.” 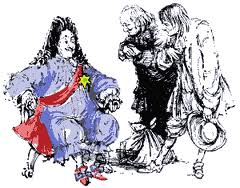 The captain of the guards heard the impostors’ strange story and sent for the court chamberlain. The chamberlain notified the prime minister, who ran to the Emperor and disclosed the astounding news. The Emperor’s curiosity got the better of him and he decided to give the two visiting professors an audience.

“Besides being invisible, your Majesty, this cloth will be woven in colors and patterns created especially for you. Your Majesty’s wisdom is evidenced by the fact that you have chosen to put your faith in expert clothificators instead of the amateurs who heretofore have been managing the royal wardrobe.”

The Emperor gave the two experts a bag of gold coins in exchange for their promise to begin working on the wonderful textile immediately.

“Just tell us what you need to get started and we’ll give it to you.” The two impostors asked for a loom, silk, gold thread, and then pretended to start to work. The Emperor thought he had spent his money wisely. In addition to getting a fabulous new outfit, he would discover which of his subjects were ignorant and incompetent. A few days later, he called the wise old prime minister, who was considered by everybody to be a man with good, common sense.

“Go and see how the work is proceeding,” the Emperor commanded him, “and come back to let me know what progress is being made.”

The prime minister was welcomed by the two scalawags.

“We’re almost finished, but we need a lot more gold thread. Here, Excellency! Admire the colors; feel the softness! The old man bent over the loom and tried to see the fabric that was not there. Cold sweat began to freeze on his forehead. “I can’t see anything,” he thought. “If I see nothing, that means I’m stupid or incompetent! “If I admit that, I’ll be fired from office.”

“What a marvelous fabric,” he exclaimed. “I’ll certainly tell the Emperor.” The two ne’er-do-wells rubbed their hands with glee. They were almost there! More gold thread and some platinum for buttons were requested to finish the work. Finally, the Emperor was told that the two doctors of clothification had come to take all the measurements needed to sew his new garments.

“Come in,” the Emperor commanded. At the same time that they were bowing before the Emperor, the two scoundrels pretended to be holding a large bolt of fabric.

“Here it is your Majesty: the result of our labor,” the schemers announced. “We have worked night and day, but at last the most beautiful fabric in the whole world is ready for you. Look at these colors and feel how fine it is!” 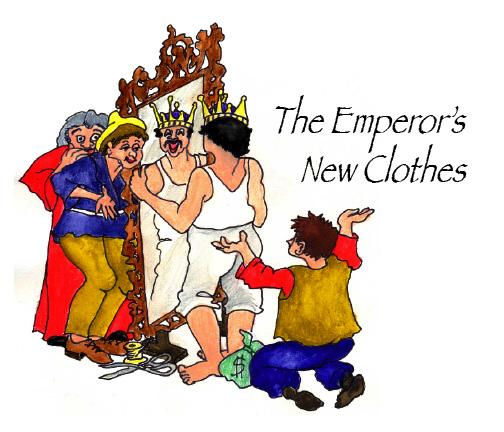 The farce continued as the two scoundrels had planned. Once they had taken the measurements, they began cutting the air with scissors while sewing with their needles in and out of the invisible cloth.

“Your Majesty, you will have to take off your clothes to try on your new ones.” The professors draped the new clothes on him and held up a large mirror. The Emperor was embarrassed, but since no one else seemed to be embarrassed he felt relieved and reassured.

“Yes, this is a beautiful outfit and it looks very good on me,” the Emperor said— trying to look comfortable but not knowing if he was wearing a suit, a robe, a ceremonial gown, or a military uniform. (It never entered his mind that his new outfit might consist of less than a jock strap.) “You have done a very fine job.”

“Your Majesty,” the prime minister said, “the people have found out about this extraordinary cloth and they are anxious to see you in your new outfit.” (The prime minister also wasn’t sure what kind of garment it was that he wasn’t seeing.) The Emperor was reluctant to show himself naked before his subjects, but he quickly relinquished his fears. After all, nobody would see him that way except the ignorant and the incompetent.

“Okay,” he said. “I shall grant the people this boon.” He summoned his carriage and the ceremonial parade was formed. A group of dignitaries walked at the very front of the procession and anxiously scrutinized the faces of the people in the street. Everyone had gathered in the main square, pushing and shoving to get a better look at the clothing. Applause welcomed the royal procession. Everybody strained to learn how stupid or incompetent their neighbors were. As the Emperor passed, a murmur rose from the crowd. 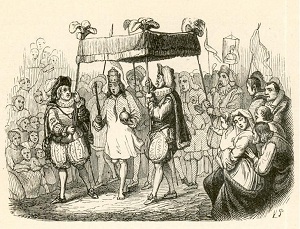 Everyone exclaimed, loud enough for the others to hear, “Look at the Emperor’s new clothes. How beautiful! What a magnificent train!”

“And the colors!” some exclaimed. “The colors of that fantastic fabric! I have never seen anything like it in all my life!” They all tried to conceal their disappointment at not being able to see the clothes. Since none of them were willing to admit their own stupidity and incompetence, they all performed exactly as the two scoundrels had predicted.

A child, however, a little boy who had no important job to retain and could only see what his eyes could actually detect, approached the carriage. “The Emperor has no clothes on him,” he exclaimed loudly.

“Foolish child!” his father scolded him. “Don’t talk so stupidly!” He grabbed the boy and started to take him away.

Before he could escape with his son, however, the sartoriologer shouted at the child. “What do you mean, he has no clothes on?”

“What evidence do you have for so ridiculous a claim?” demanded the haberdasheristicist.”

“If he had no clothes on,” sneered the sartoriologer, pointing at the slope-shouldered Emperor, “would he hold his shoulders like that? Can’t you see that if he didn’t have the weight of gold cloth pulling them down, he would be carrying his shoulders much higher up?”

The haberdasheristicist, pointing to the Emperor who could scarcely move due to embarrassment and fear, advanced another powerful argument to prove the existence of the exquisite apparel. “If he didn’t have any clothing on,” he asked, flailing his own arms around, “wouldn’t he be able to move his arms about with greater ease?”

Affecting the tone of an oh-so-wise authority and with disdain so acrid his breath nearly corroded the gold plating off the royal crown, the sartoriologer wagged his finger around as though it were circling about the imperial body and inquired rhetorically, “Wouldn’t the air circulate around him with less turbulence if in fact he had no clothes on?” The scoundrel congratulated himself on the ingeniousness of the argument he had just concocted.

“Indeed it would, Professor,” the haberdashersticist agreed, delighted by the mental agility of his partner in crime. Glaring down, then, at the boy he lectured him in a voice as condescending as a waterfall.

“Tell me,” he sniffed and pointed toward the Emperor’s fingertips. Bending over and pretending to scrutinize the blue-from-the-cold hands of the Emperor—it was a rather chilly day for one to be parading around wearing such rarified textiles—he demanded, “Tell me, then—if you are so smart and qualified to pass judgment in matters outside your area of expertise—why would the Emperor’s fingernails show such tiny marks of abrasion along their margins unless in fact he had been scratching them on the surface of these gorgeous buttons on this beautiful coat?”

“But I can’t SEE any clothes on him.”

“But I can’t SEE any clothes on him,” replied the child in bewilderment.

“And just who are YOU,” the sartoriologer hissed, “to make such a silly claim when real experts such as I and my colleague—both of us Harvard professors who were educated and trained for years in the hyperfine arts of sartoriology and haberdasheristics in the most prestigious clothification centers in the world—can see with perfect clarity that these clothes exist?”

“But he’s naked as a jay-bird,” whimpered the intimidated child.

“You better give this boy a good thrashing,” the clothificators in unison ordered the father of the boy. “Teach him to have more respect for the knowledge and wisdom of his elders and not pretend to have knowledge in fields outside his area of expertise,” the sartoriologer commanded as he turned away from the boy and strode off toward the Emperor. The Emperor was standing half-frozen and rigid on the deck of his carriage in the midst of the crowd of subjects.

“Your Majesty,” he fawned as he relieved the page of his responsibility to hold up the train of the imaginary cloak, “let me assist you.”

The Emperor by now had figured out that he wouldn’t be so cold if in fact he actually was wearing clothing. He dared not, however, to admit his error. He decided to continue the imperial procession to further the illusion that anyone who couldn’t see his clothes was either stupid or incompetent.

When he got back to the palace, however, he took a long soak in a hot bath. He never wore those fine regalia again—perhaps because he was never able to find them.

Jesus of Where? A response by Frank Zindler to Bart Ehrman

Over 60 responses to Bart Ehrman’s book ‘Did Jesus Exist?’