When Was the First Christmas?

When Was the First Christmas? 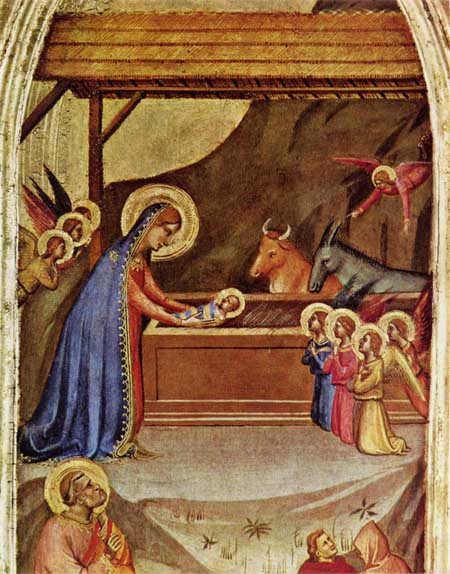 For the past nearly 1,700 years, a significant portion of the Western world has celebrated the day of December 25th as the birth of the divine Son of God and Savior Jesus Christ. Thousands of images have been created, as well as songs, poems and other artistic endeavors, depicting the baby Jesus lying in a manger surrounded by ox and lamb, with the Virgin Mary, Joseph, angels and three Wise Men looking on in wonder at the luminous infant. This imagery, we are told, represents the very first Christmas, when the Lord of the Universe was born on this earth, on the 25th day of December in the year 1 AD/CE. But is this story true?

“O, how wonderfully acted Providence that on that day on which that Sun was born…Christ should be born.”

The tradition of “Christmas” or December 25th as the birth of Jesus Christ, the main figure of the New Testament who is believed by nearly two billion Christians worldwide to have been God in the flesh come to save mankind from its sins, is traceable to the late second to third century AD/CE. During that time, the Church father Cyprian (d. 258) remarked (De pasch. Comp., xix): “O, how wonderfully acted Providence that on that day on which that Sun was born…Christ should be born.” In other words, the Savior’s birth was being observed at the winter soltice. What is seldom known, however, is that prior to that time, Christ’s birth was placed on a variety of days, indicating its non-historicity: 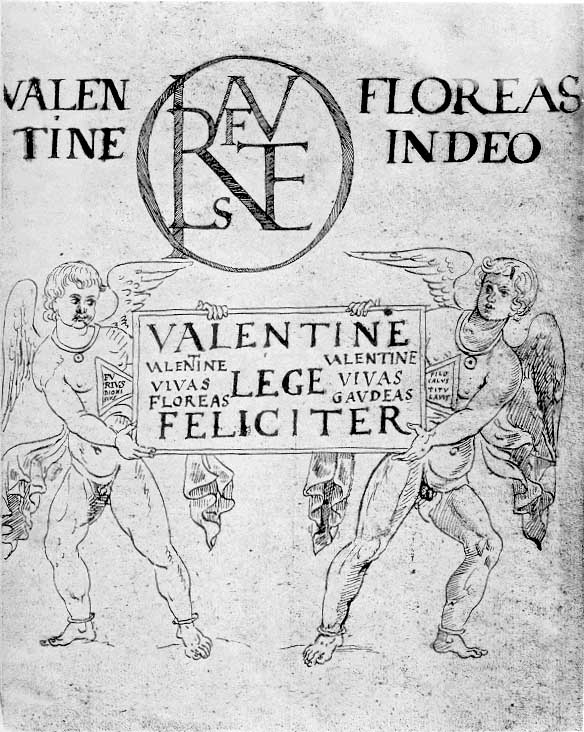 December 25th as Christ’s birthday makes its way into a “calendar” or chronology created in 354 AD/CE called the Calendar of Filocalus or Philocalian Calendar. In addition to listing the 25th of December as the Natalis Invicti, which means “Birth of the Unconquered (Sun),” the Calendar also names the day as that of natus Christus in Betleem Iudeae: “Birth of Christ in Bethlehem Judea.” Hence, we can see that people of the fourth century were clearly aware of the association, if not identification, of Christ with the sun, as they had been in Cyprian’s time and earlier, since Jesus is claimed to be the “Sun of Righteousness” in the Old Testament book of Malachi (4:2).

“But unto you that fear my name shall the Sun of righteousness arise with healing in his wings.”

Over the past few decades, many people have come to understand that “December 25th” represents not the birthday of a “historical” savior named Jesus Christ but the time of the winter solstice in the northern hemisphere, when the day begins to become longer than the night, and the sun is said to be “born again,” “renewed” or “resurrected.” 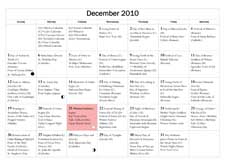 By the time Jesus’s birth was placed at the winter solstice there had been numerous solstitial celebrations of the coming “new sun” in a wide variety of places. Many winter-solstice festivals can be found listed in my 2010 Astrotheology Calendar, for the month of December. As I write there:

December is full of winter-solstice celebrations beginning in remotest antiquity. For example, the date of December 21st as the festival of the Japanese sun goddess Amaterasu represents her “coming out of the cave,” a typical solar myth.

Likewise noteworthy is the festival of the Egyptian baby sun god Sokar occurring on 26 Khoiak, as related in the Calendar of Hathor at Dendera, corresponding at the turn of the common era to December 22nd. The longstanding ritual of Sokar being carried out of the temple on this day in an “ark” closely resembles the censored commentary by Church father Epiphanius (c. 310/320-403) concerning the Egyptians bringing forth the baby sun born of a virgin at the winter solstice. 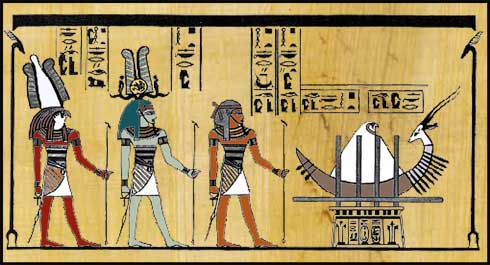 The winter-solstice celebrations were so important that at times they exceeded the one or two days of the actual solstice in the Gregorian calendar, i.e., December 21st or 22nd. Solstice celebrations therefore do not necessarily fall on the traditional time of the solstice but may occur up to several days before or after, such as is exemplified by the Roman celebration of Saturnalia, which began on  December 17th and ended on the 23rd.

Hence, a “winter solstice” birth as asserted for a number of gods would not necessarily be celebrated on those exact days or even on the more commonly accepted date of December 25th, which signifies the end of a three-day period of the solstice—meaning “sun stands still“—as perceived in ancient times. In this regard, the winter-solstice birthday of the Greek sun and wine god Dionysus was originally recognized in early January but was eventually placed on December 25th, as related by the ancient Latin writer Macrobius (4th cent. ad/ce). Regardless, the effect is the same: The winter sun god is born around this time, when the day begins to become longer than the night.

In 275 ad/ce, December 25th was formalized by Emperor Aurelian as the birthday of Sol Invictus, the Invincible Sun, and it is claimed that Aurelian likewise combined the Greek festival of the sun god Helios, called the Helia, with Saturnalia as well to establish this solstice celebration. The highly important Mysteries of Osiris, which begin on the 14th of December and end with his resurrection on December 26th, follow a winter-solstice pattern similar to the Brumalia, Saturnalia and Christmas celebrations. The facts that this period comprises several festivities having to do with the passion, death and resurrection or rebirth of this prominent Egyptian sun god, and that the dates for these mysteries happened to correspond to the winter solstice when the wandering Egyptian Calendar was finally fixed, are extraordinary.

How Far Back Do Winter-Solstice Celebrations Go? 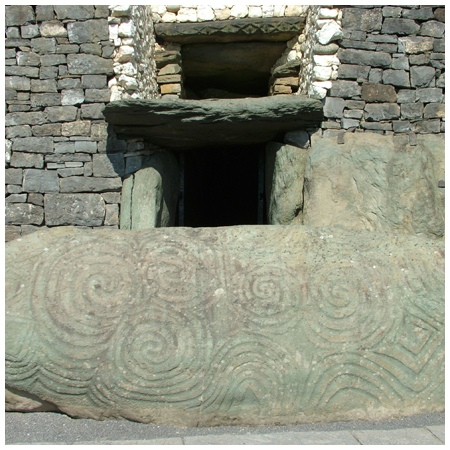 In my 2011 Astrotheology Calendar, the month of December is illustrated by the “passage tomb” at Newgrange, Ireland, which is oriented to the sunrise on the winter solstice or around December 21st in the Gregorian calendar. This tomb—which has also been called a “temple” based on its evident importance—is guarded by a large boulder with spiral solar symbols and dates to around 3200 BCE. The winter-solstice sunrise at Newgrange sends a shaft of light down the cruciform corridor and chamber. This ceremony is believed to signify the “return to life” or resurrection from the death of winter. In this sacred site is thus a 5,000-year-old “cross of light” representing the resurrection to life or rebirth on “December 25th.”

“In the sacred site at Newgrange is a 5,000-year-old ‘cross of light’ representing the resurrection to life and rebirth on ‘December 25th.'” 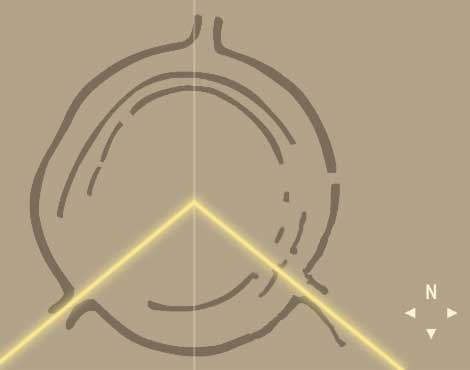 There are many other archaeological sites globally that are astronomically aligned, particularly to the winter solstice, some even older than Newgrange, such as the wooden circle or “henge” at Goseck, Germany, which may be 7,000 years old. The building of such astronomically aligned edifices, which are widely understood to be “temples” of a sort, indicates that the ancient astrotheological motif of the sun god’s birth at the winter solstice is at least that old. Moreover, there is evidence that this solar observation is much older even than that.

The suggestion that the winter-solstice celebration by human beings in several parts of the world, particularly in the farther northern reaches of the northern hemisphere, dates back to Paleolithic times and was part of religious “mysteries” even then is indicated by a number of artifacts, including the painting known as “Sorcerer with the Antelope’s Head” from Les Trois Freres caves in the French Pyrenees. As I write in Suns of God, these caves were occupied during the Magdalenian period, 10,000-16,000 years ago, although mythologist Robert Graves dates the paintings therein to “at least 20,000 B.C.”

In Prehistoric Lunar Astronomy, Indian scholar S.B. Roy theorizes that these paintings are representative of secret deposits relating to the mysteries, remarking that they would “necessarily be performed at a particular auspicious moment,” upon which their potency would depend. This auspicious moment would be dependent on the solar and lunar phases, as well as the seasons. 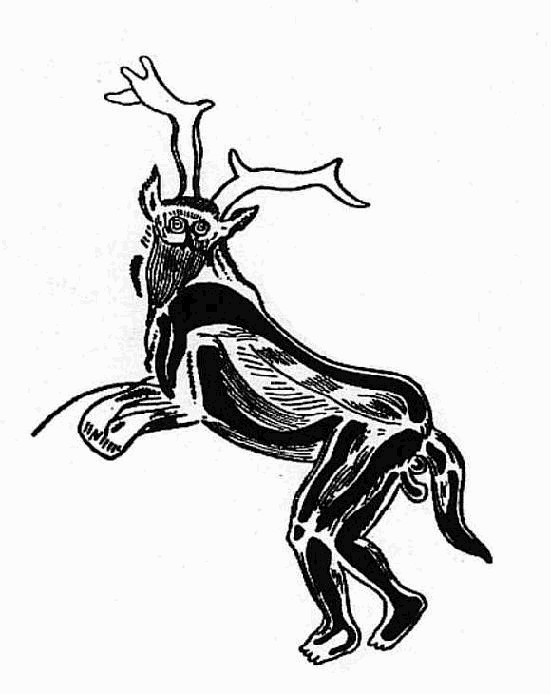 As I also relate in Suns of God, Roy further posits that the antelope-headed “sorcerer” was “a figure marking the onset of a season.” The reasons for this assertion include that the “remote traditions” in the Rig Veda and in Vedic astronomy relate that the Stag’s head represents the star L-Orionis and the winter solstice at the new moon, as well as the summer solstice at the full moon. Roy concludes that the sorcerer figure “marked the winter solstice,” which was “a great day in the Ice Age of Europe.” Based on the astronomy, the figure dates to 10,600 BCE.

Discussing the European Magdalenian cave-dwellers of around 10,000 years ago, Roy also asserts:

In Northern Europe and Asia, in latitudes of 60º and higher, where Slavonic languages now prevail, the winter was then long and dark. It was very cold. Everyone looked to the day of the winter solstice when the sun would turn North. The astronomers would know the date even though the sun itself was not visible. This was the great day, for the spring would now come.

Thus, the winter solstice was an important factor in human culture, particularly that of the cold, northern latitudes, at least 12,000 years ago.

“‘Christmas’ is thus an extremely ancient celebration, predating the Christian era by many millennia.”

The winter solstice celebration that developed throughout much of the inhabited world has been handed down as “Christmas,” i.e., December 25th, the birthday of the “sun of God.” “Christmas” is thus an extremely ancient celebration, predating the Christian era by many millennia.

Have a Happy Solstice! 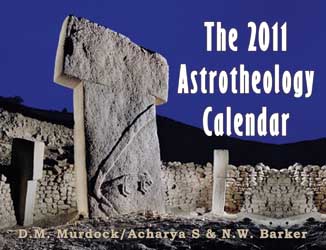