Of course, there have been other substances going back even farther that have been claimed to cure cancer, such as Dr. Wilhelm Reich’s orgone energy. However, Dr. Burzynski’s treatment has been scrutinized scientifically for decades and, from the video below, seems to be quite effective. I’ve known about – and been skeptical of – his work since the early 1990s, but it actually goes back to the ’70s. Thus, according to Burzynski’s proponents, an apparent cure for many forms of cancer – peptides called “antineoplastons” – has been known for some 35 years but allegedly has been battled against and suppressed by governmental agencies and medical authorities since that time.

The Wikipedia article about Dr. Burzynski’s work asserts, “The clinical efficacy of these treatments has been established in Phase II clinical trials, and is now in Phase III trials.” (Based on a press release from Burzynski’s research institute.)

The documentary linked below, “Burzynski, the Movie,” is available for free until June 20th, after which time it will be for sale, with the proceeds used to help get FDA approval of his treatment. The film – which, oddly enough, was directed by a friend of mine, Eric Merola – is well worth watching, even or especially by skeptics. Naturally, Dr. Burzynski has many doubters and critics. (See the articles below.) If the story is accurately depicted, however, it would seem that, had Dr. Burzynski been taken more seriously decades ago, there’s a chance my beloved mother might be alive today, instead of succumbing to ovarian cancer and radiation/chemotherapy.

Burzynski: Cancer Is Serious Business from BurzynskiMovie on Vimeo. 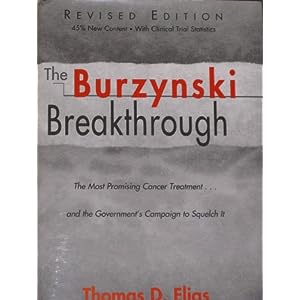 The Great Cancer Hoax: The Brilliant Cure the FDA Tried Their Best to Shut Down…
Cancer Breakthrough: 50-60% Success Rate, Cures the Incurable
Stanislaw Byrzynski on Wikipedia

For a critical look, see Stanislaw Burzynski and “Antineoplastons.” (This article seems very dated, however.) See also the lengthy and snide article from the Houston Press, “Cancer Doctor Stanislaw Burzynski Sees Himself as a Crusading Researcher, Not a Quack,” in which the author remarks (among many other things):

So while mainstream oncologists might believe that Burzynski orbits the quackosphere, he has achieved near-­messiah status among journalists, pseudoscientists and armchair oncologists who believe in an omnipotent Cancer Industry determined to quash any treatments that threaten the standard regimens of surgery, radiation or chemo. Often, the cornerstone of their belief is that every oncologist in the country is absolutely fine with children dying gruesome deaths because they are somehow making money off standard treatments.

Having a 14,000-square foot home worth $6.2 million doesn’t help win over skeptics (click to enlarge).

UPDATE: Here’s a related story about a young man who says he has been pressured by someone claiming to represent the Burzynski clinic, after the 17-year-old posted critical comments to his blog.