Boston bombing suspects' uncle: America 'gives everybody chance to be treated like human being'

Boston bombing suspects' uncle: America 'gives everybody chance to be treated like human being'

Sounds like their uncle has his head on straight.

“I’m ready to kneel in front of them and ask their forgiveness,” Tsarni said of the victims of his nephews’ crime. “I respect this country; I love this country … this country that gives everybody chance to be treated like human being.”

A late-night police chase and shootout left one marathon bombing suspect—26-year-old Tamerlan Tsarnaev—dead and the other, his younger brother, on the run, police here said. One police officer was killed and another seriously wounded during the violent spree. The city of Boston and its surrounding areas have ground to a standstill as the manhunt continues in a 20-block radius of Watertown, with local leaders warning residents to stay indoors. Police also announced there will be a “controlled explosion” in a building in Cambridge on Friday afternoon.

NBC News reported that police have uncovered seven improvised explosive devices (IEDs) in Watertown and in the brothers’ home in Cambridge.

“It is important that folks remain indoors, keep the doors locked and not open the door unless there is a uniformed law enforcement officer on the other side of it,” Gov Deval Patrick said at a 12:30 p.m. press conference.

The suspect on the lam is Dzhokhar A. Tsarnaev, 19, of Cambridge, Mass., a student at the University of Massachusetts Dartmouth. He and his brother’s family is originally from Chechnya, a volatile and once war-torn southern Russian republic. The family fled to Kyrgyzstan and eventually immigrated to the United States as refugees about 10 years ago. 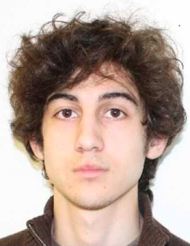 His older brother studied at a local community college and was a Golden Gloves boxer. Tamerlan Tsarnaev also reportedly had a wife and young child. Dzhokhar Tsarnaev, who was remembered by former classmates as bright and personable, posted links to pro-Chechnyan independence sites on his social media page, and listed his world view as “Islam.”…

The suspects’ uncle told the local CBS News station that the pair had lived in the country since 2002. The uncle, when told that one of his nephews was killed, replied that he deserved it. “He deserved his. He absolutely deserved his,” Ruslan Tsarni said. “They do not deserve to live on this earth.”

In an emotional press conference, Tsarni said his nephews had brought shame upon his family, and called them “losers.” He said they were not “able to settle themselves” and were “angry at everyone who was able to.” He said he did not believe they were motivated by the radical politics in Chechnya or their Muslim religion.

He added that he hadn’t been in touch with the family for several years but would not say why.