In Did Jesus Exist? (p. 24), New Testament scholar Bart Ehrman quotes my book The Christ Conspiracy and refers to an image of a bronze sculpture of a cock, commenting in brackets (except for my “sic”):

“’Peter’ is not only ‘the rock’ but also ‘the cock’ or penis, as the word is used as slang to this day.” Here Acharya shows (her own?) hand drawing of a man with a rooster head but with a large erect penis instead of a nose, with this description: “Bronze sculpture hidden in the Vatican treasure [sic] of the Cock, symbol of St. Peter” (295). [There is no penis-nosed statue of Peter the cock in the Vatican or anywhere else except in books like this, which love to make things up.] 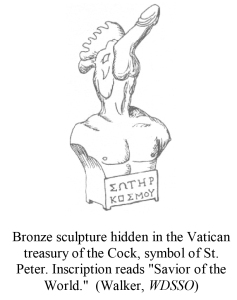 The quote from my book is on p. 168, while the image in question is on p. 295b. The two are not related, except that I say the cock/rooster – not the statue – is a symbol of St. Peter, explaining the “awkward” wording of the phallic image’s caption, which I deliberately did that way for just such emphasis: “Bronze sculpture hidden in the Vatican treasury of the Cock, symbol of St. Peter“

Along with many other indications throughout his book, Ehrman’s conflation of the quote on p. 168 with the image on p. 295b suggests he did not even read my book but evidently farmed it out and the other works he is critiquing to assistants.

Because Ehrman apparently didn’t read my book, he also didn’t notice the citation of Barbara G. Walker’s Woman’s Dictionary of Sacred Symbols and Objects, where the sculpture image came from, suggesting erroneously instead that I drew it myself.

Ehrman obviously didn’t know that the “priapus gallinaceus” is an entire genre or that this bronze statue was in the Vatican. After being shown the evidence, he later stated the statue does exist and is in the Vatican (below), but he disingenuously pretends that his original, inaccurate reference to it being “of Peter” means he didn’t err in saying it didn’t exist:

Again, I never said the statue was of Peter, despite the fact that in other parts of the book (pp. 168-169 and 285) I do discuss the “peter” and “cock” symbolism, the latter in a chapter called “The Bible, Sex and Drugs.” I also include on p. 169 in a section about Peter and the phallic meaning of his name in a quote from Barbara Walker (Woman’s Encyclopedia of Myths and Secrets, 79) concerning the bronze sculpture:

The cock was another totemic “peter” sometimes viewed as the god’s alter ego. Vatican authorities preserved a bronze image of a cock with an oversize penis on a man’s body, the pedestal inscribed “The Savior of the World.” The cock was also a solar symbol.

While the “cock/peter” is associated in this paragraph with the sculpture, it is clear from the word “preserved” that Walker means it is a pre-Christian artifact, one of the priapus genre, as discussed in my article “The phallic ‘Savior of the World’ at the Vatican revisited.” Hence, neither of us has identified or equated this priapus gallinaceus in question as a “statue of Peter,” as Ehrman erroneously asserts. In addition to its other features, a remarkable aspect of the statue is its inscription “Savior of the World,” of interest to us because it does not refer to Jesus or other Christian figure but indicates a pre-Christian salvation cult using the same language employed also to describe Christ.

Instead of apologizing for his errors and misrepresentations, Ehrman thus deflects and mocks me further, even though it is he who did not know about the priapus gallinaceus, such that he himself thus is not a “scholar of antiquity.”

Despite his unprofessional antics, Ehrman clearly defamed me by claiming that the statue did not exist, that it wasn’t in the Vatican and that I “made it up.” Thus, his comments in DJE are FALSE and libelous. 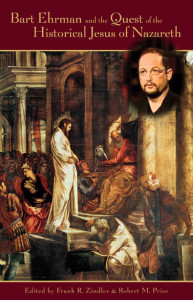 Moreover, as demonstrated in dozens of pages of my criticisms, several other of Ehrman’s remarks in DJE about my work are also false, as are many of his comments concerning the works of other mythicists, likewise rebutted in some 80 different essays. A number of these essays are included in the rebuttal book edited by Frank Zindler and Robert M. Price, Bart Ehrman and the Quest of the Historical Jesus of Nazareth.

Bart Ehrman needs to retract his falsehoods and apologize, or his book needs to be pulped.