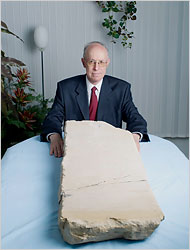 Here’s a video that accompanies the news from 2008, as I reported in my blog here:

An ancient Hebrew tablet is creating a stir after certain scholars identified it as containing a pre-Christian account of the awaited Jewish messiah’s death and resurrection after three days. If this artifact is genuine, from the era claimed, and actually says what is asserted, the discovery clearly demonstrates that the idea of a messiah, savior or divine redeemer dying and rising after three days existed decades before the alleged advent of Jesus Christ. This dying-and-resurrecting motif is one of a number that various writers and scholars have claimed demonstrate Jesus to represent not a “historical” personage but a mythical concept found in religious ideologies and mythologies long prior to the so-called Christian era.